Tars at the Breakwater Swim 2012

In the early afternoon of Sunday 13th August 100 people were taken by boat from the Barbican in Plymouth out to the Breakwater in Plymouth Sound. There, they all threw themselves into the waters of an uninviting English Channel and proceeded to swim back to Plymouth Hoe and safety, a distance of two miles. What was happening here?  Was there an attempted highjack? Had the beer gone off? No. The swimmers were hoping to raise £25,000 for two Regional Charities (The Chestnut Appeal and Children’s Hospice South West) and the Tars had been asked to welcome them back ashore with a shanty or ten.
It was a real pleasure for the Tars to be there for several reasons.
Firstly, we love to support local charities and good causes, and the work done by the Chestnut Appeal (for Prostate Cancer) and the Children’s Hospice deserves everyone’s respect and help.
Secondly, we were asked to perform at the Terrace Café, which overlooks the beach where the swimmers were coming ashore and enjoys fantastic views of the Sound. This must be one of the most special “venues” we have ever sung at. (And the staff were great too-big thanks to them.)
Finally, the sun came out! The forecast had been lousy all week, and we had arrived with the wet weather gear at hand, only for the sun to appear in a clear blue sky and the temperature to reach levels rarely seen in the West. (Well, rarely in 2012.) The weather gods clearly favour good causes, combined with fine shanty singing. 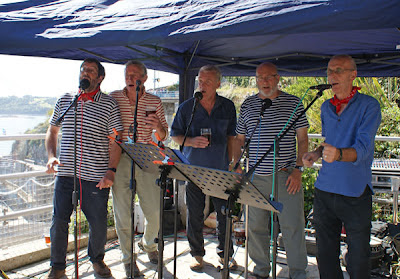 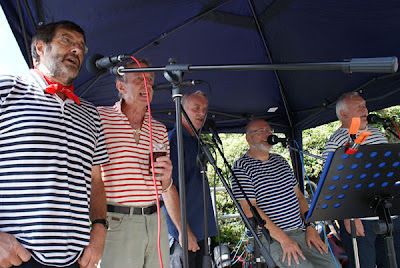 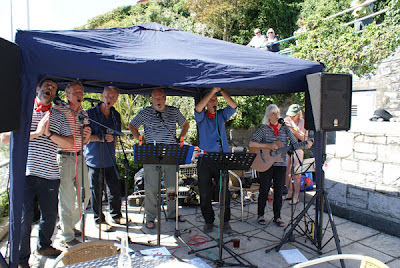